As we move into 2019, I’ve been considering what I can do to help our world from my own kitchen. Of course, there are the usual things like cutting the consumption of meat and dairy, and drinking from a reusable water bottle, which we’ve been doing for some time. But I wanted to consider something that I was doing that wasn’t necessarily obvious to me. So I reflected on what I could do and set myself a few goals for the year ahead:

I am a great fan of Marion Nestle and her work. I recently read her latest book Unsavory Truth: How Food Companies Skew the Science of What We Eat and, as with all her other books, found it fascinating. In this book, Nestle addresses the power food companies wield over food and nutrition research. As Nestle notes, “Until recently, government granting agencies —mainly NIH and the USDA —funded about half of all food, nutrition, and agriculture research. But by 2013, industry and foundations accounted for 70 percent of food-related research. This shift occurred as a result of two simultaneous trends: a decline in federal funding and a sharp increase in private funding that began early in the twenty-first century.” (Unsavory Truth, p. 158) Because they fund much of the research done on food and nutrition, they can bias results in their favor.

Because large food companies are able to spend significant sums of money on research, they can influence the scope of the studies and the questions being asked. The results, therefore, often reinforce the need for, or mitigate the adverse effects of their products in order to increase that product’s sales.In her book, Nestle explores how this is done and the consequences it has, namely that food and nutrition research we are provided may be subjective and driven by commercial interests.

The main takeaway from Marion Nestle’s book is that we, as consumers, need to be proactive in identifying nutrition studies that seek to promote companies’ products, and ask that our legislators promote the best interests of citizens. As Nestle notes at the end of her book, “Just as “voting with your fork” is useful, so is voting with your vote… As citizens, we need and deserve healthier, more sustainable, and more ethical food systems. If we do not demand them, who will?” (Unsavory Truth, p.231).

I’m Rachel Khanna. I’m a strong advocate of eating organic and local foods and leading a healthy lifestyle. I became a health counselor to fulfill my growing passion of working with children and families to improve their health and to make a positive impact on their lives, perhaps a result of raising four children of my own.

My passion for food and how it affects your overall well-being has led me to years of study and research—and ultimately to a practical understanding of what it takes to lead a healthy life. This website is dedicated to sharing these insights with you.

If you’d like to learn about good nutrition so you can improve your diet and feel your best every day, then you’ve come to the right place. READ MORE 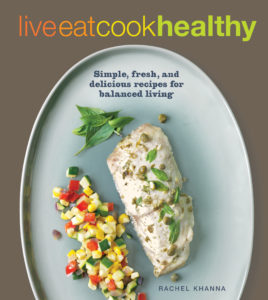 In Live Eat Cook Healthy, learn how to assess your lifestyle and eating habits, how to feed your body what it truly needs, and how to buy the healthiest, whole foods possible. Then, turn to the more than 130 recipes designed to make your everyday eating nutritious and delicious. 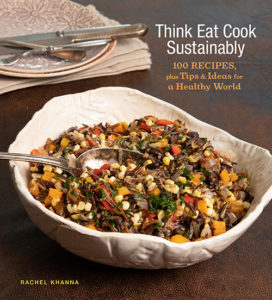 Think Eat Cook Sustainably is both a cookbook and a guide to the foods that benefit one’s own health and the health of the world around us. In addition to 100 delicious and easy-to-make recipes, you will find formulas to help you experiment with your own favorite ingredients, and in-depth information about choosing nutritious and sustainable ingredients.